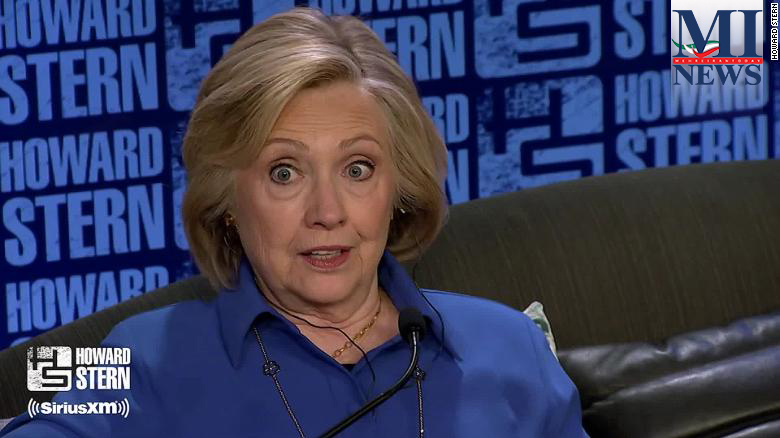 Out of office and (seemingly) unlikely to ever run for any public office again, Hillary Clinton is throwing off her decades-long guardedness to offer her raw opinions about, well, everything.

And in an interview with Howard Stern Wednesday for a new book she co-wrote with her daughter, Chelsea, Clinton absolutely drops the hammer on none other than Vermont Sen. Bernie Sanders.

Asked by Stern whether she hated Sanders for the long primary campaign he ran against her in 2016 and the slowness with which he offered his eventual endorsement, Clinton said “I don’t hate anybody,” before adding about the time it took Sanders to endorse her: “He could have. He hurt me, there’s no doubt about it.”
Then she delivered the dagger: “And I hope he doesn’t do it again to whoever gets the nomination. Once is enough.”
Woof.
Clinton’s comments to Stern about Sanders are remarkable put-downs — with multiple layers.
First, she blames — at least in part — her loss in the 2016 election to President Donald Trump on Sanders’ slow-roll of an endorsement of her candidacy — and the lack of unity that signaled. (Clinton made similar allegations against Sanders in her 2017 memoir about the race, saying that Sanders’ attacks against her did “lasting damage” to her chances in the general election.)
A look at the timeline shows that it took about a month from the time Sanders ended his candidacy (after the last primaries in early June) to the time he endorsed Clinton in mid-July 2016. But even when that endorsement came, it was clear that tensions remained. As CNN wrote at the time:
“There appeared to be little natural chemistry between Clinton and Sanders and their body language was noticeably stiff. The two avoided physical contact after first walking on stage together, and Sanders, in his 30-minute speech, repeatedly mentioned Clinton by name without acknowledging that she was standing next to him looking on.
“After concluding his speech, Sanders appeared to move in for a handshake — which Clinton ignored by stretching out her arms and offering a hug, instead.”
Let’s remember what Clinton said again: “And I hope he doesn’t do it again to whoever gets the nomination. Once is enough.”
Implied — and not in very subtly — in that comment is that Sanders isn’t going to be the Democratic nominee in 2020. Which is a somewhat bold prediction — given that Sanders is second in national polling and among the top four in Iowa, New Hampshire and beyond. To be clear: Sanders isn’t the current frontrunner — that’s former vice president Joe Biden still — but he’s absolutely in the mix, making Clinton’s seeming certainty that he won’t be the nominee newsworthy.
Then there’s the warning to Sanders that when he does lose again (as Clinton is sure he will), that he had better not repeat the slow-walk endorsement he gave her because he already cost the party a chance at beating Trump once. Which is heavy stuff!
Even before Clinton’s latest comments about Sanders, there was very little love lost between the two politicians and, even more so, between their supporters. What Clinton said Wednesday, however, will rip off the scab from 2016.
Original Source

Treasury’s Mnuchin Says U.S. Will Ramp Up Pressure On Iran

Bulgaria Seizes 288 Kilos of Heroin in Truck From Iran