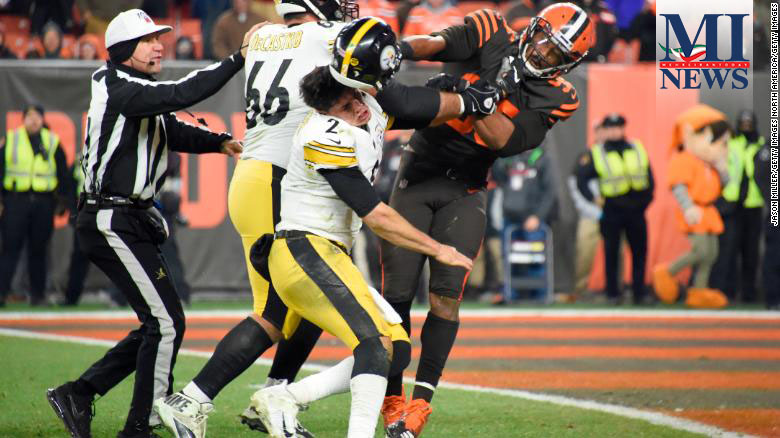 The Cleveland Browns‘ 21-7 win over the Pittsburgh Steelers came with a little unannounced action Thursday night.

Browns defensive end Myles Garrett ripped the helmet off Steelers’ quarterback Mason Rudolph in their NFL week 11 clash and clocked him in the head with it, sparking a brawl that descended into chaos as players from both sides spilled onto the field.
Pittsburgh’s Maurkice Pouncey, who was seen punching Garrett and kicking him after he had been tackled to the ground, said Garrett “could have killed” Rudolph.
“What if he’d hit in him the temple?” said the center.
The NFL later announced it is suspending Garrett indefinitely — and at least for the rest of the season, including any playoff games — for the incident.
Pouncey was suspended three games, and Cleveland’s Larry Ogunjobi, who pushed the quarterback from behind, was suspended one game.
Both teams have been fined $250,000 each.
READ: Ex-NFL kicker Morten Andersen backs Carli Lloyd’s switch from soccer 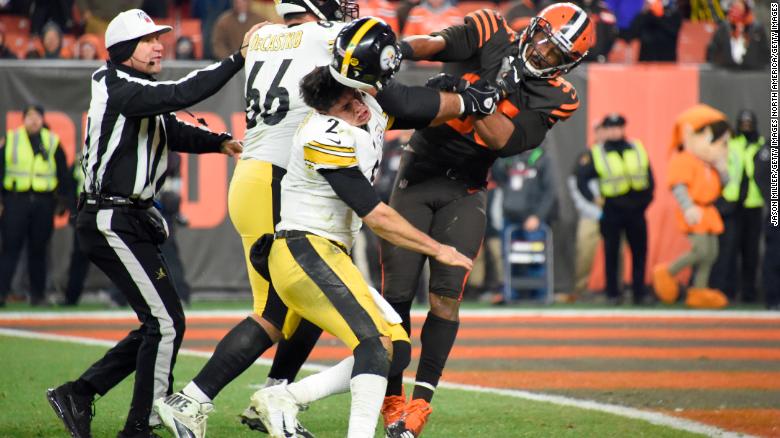 Quarterback Mason Rudolph of the Pittsburgh Steelers fights with defensive end Myles Garrett of the Cleveland Browns.
The fracas all started when Rudolph completed a meaningless 11-yard pass to running back Trey Edmunds late in the fourth quarter.
The quarterback was dragged to the ground by Garrett and after tussling on the turf, Garrett dislodged Rudolph’s helmet from his head and proceeded to swing it at the former Oklahoma State quarterback’s head.

.@MikePereira explains what kind of suspensions should be expected for players following tonight’s Steelers-Browns game. 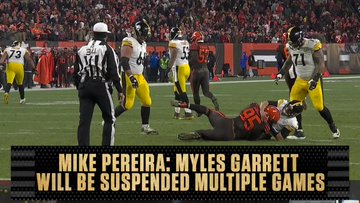 2,734 people are talking about this
Obviously not pleased with Garrett’s actions, Steelers players — led by Pouncey and David DeCastro — pulled Garrett away from Rudolph, before Pouncey punched and kicked the Pro-Bowler.
Pouncey, Garrett and Cleveland’s Ogunjobi — who pushed Rudolph to the ground from behind — were all ejected from the game.
“I thought it was pretty cowardly,” Rudolph said during a news conference after the game. “I’m not going to back down from any bully.”
For his part, Garrett told reporters he made a mistake. “I lost my cool,” he said.
The chaos erupted in the final 14 seconds of the game, according to Bleacher Report.
“On 3rd-and-29 with no hope of a comeback, the Steelers attempted a screen pass. Garrett played through his block, hit Steelers quarterback Mason Rudolph and took him to the ground,” it said.
“Chaos ensued. The quarterback became enraged by the needless takedown and started a skirmish. Garrett lifted Rudolph to his feet by his facemask. The helmet strap eventually gave way, but the defensive end didn’t drop the quarterback’s headgear after removing it from its owner.”
READ: Tom Brady says again that he will play in the NFL until he’s 45 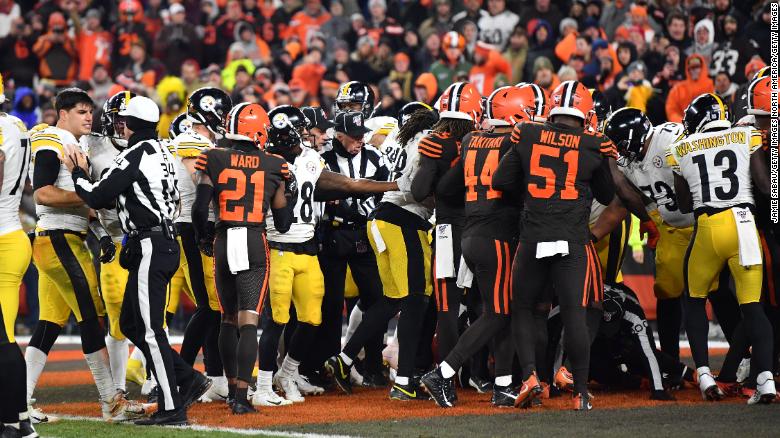 Steelers and Browns fight in the end zone near the end of the game.
Browns quarterback Baker Mayfield called Garrett’s actions “inexcusable” and “dangerous,” and felt the last eight seconds changed how the win felt.
“It feels like we lost,” Mayfield said. “This is a physical, violent game and there’s moments if you don’t keep your cool, bad things can happen and he knows that. It’s inexcusable and he knows that.
“There’s no other way around it, he’s going to own up to it and he’s going to handle it and this locker room is going to have to come together because this is going to be a soap opera on the outside much like the media has portrayed us to be for the whole season.”
READ: NFL team promotes undrafted player blind in one eye to active roster 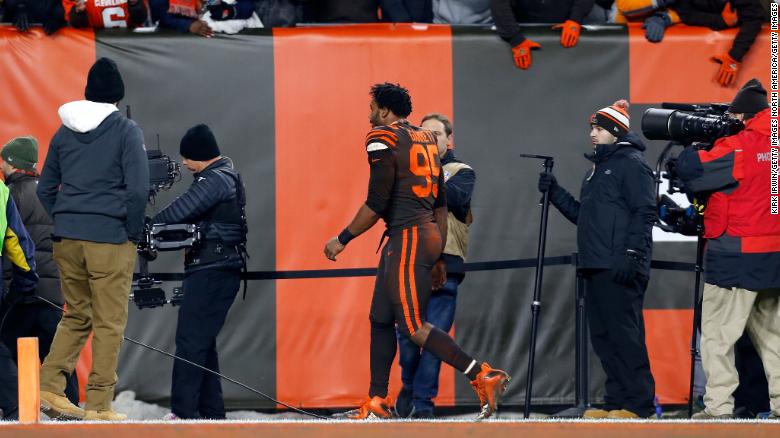 Garrett walks off of the field after being ejected.
Browns’ head coach Freddie Kitchens said the incident left him embarrassed.
“He (Garrett) understands what he did. He understands what he did is totally unacceptable,” Kitchens said.
Fox commentator Joe Buck, who was covering the game, described the incident as “one of the worst things I’ve ever seen on a professional sports field.”
Visit CNN.com/sport for more news, features, and videos
The win was Cleveland’s second straight victory, leaving them with a 4-6 record. The Steelers are now 5-5.
The two teams will face off again on December 1.
Original Source

Next Anthony Davis Deal Must Factor in Aging LeBron, Another Potential...

Clinton Portis is among 10 former NFL players charged in an...